The Circle line, coloured yellow on the tube map, is the eighth busiest line on the London Underground [1], with ridership figures are listed for each line separately. It forms a loop line around the centre of London on the north side of the River Thames.

The line became known as such in 1949, when it was designated separately from its parent lines, the Metropolitan line and the District line, although it had been shown on Underground maps since 1947. Because of this, it can be thought of as a "virtual line", as the Circle line does not have any stations for its sole use and only has two short sections of track over which it operates exclusively: the chords between High Street Kensington and Gloucester Road, and between Tower Hill and Aldgate.

As the name implies, trains on the line run a continuous circuit. A complete journey around the line would take 45 minutes, but time-tabling constraints mean that each train has a scheduled two-minute stop at High Street Kensington and Aldgate, extending the time required for a full circuit to 49 minutes. This allows the service to operate with seven trains in each direction with a seven-minute service interval. It has 27 stations and 14 miles (22.5 km) of track. There are usually quicker routes on other lines when travelling from south to north or vice versa. In the north, east and west of central London, the Circle line approximately outlines Travelcard Zone 1, but in the south there is a substantial portion of the zone outside the Circle line. Apart from the two-stop shuttle Waterloo & City line, it is the only line completely within Zone 1. Out of the 27 stations served, most have Circle line platforms that are wholly or almost wholly underground; while those at Edgware Road, Farringdon, Barbican, Aldgate, Sloane Square, South Kensington, High Street Kensington, Notting Hill Gate and Paddington are in cuttings or under train-sheds. However these are still all below street level, albeit only a few feet.

All Circle line trains are in the distinctive London Underground livery of red, white and blue and are the larger of the two sizes used on the network. These trains use C stock, introduced 1969-70, and also in 1978. They are expected to be replaced with S Stock by 2012.

The principal depot for the Circle line is at Hammersmith, but there are several other sidings at Barking, Edgware Road, Triangle Sidings (in Kensington) and Farringdon.

As trains are constantly running in the same direction around the line, the wear on the wheels becomes uneven. To combat this, once each day the train journeys from Tower Hill to Liverpool Street via Aldgate East instead of directly via Aldgate. This effectively reverses the train, and puts the wear on the opposite set of wheels. 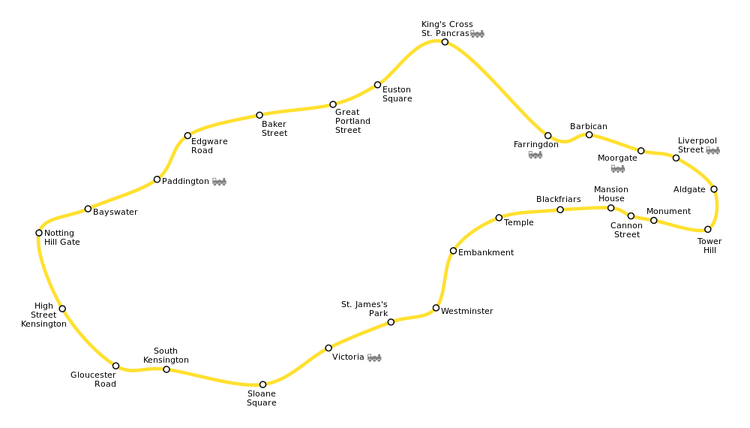 in order, clockwise from Paddington

It was planned that a new signalling system would be used first on the sub-surface lines from the end of 2016, but signalling contractor Bombardier was released from its contract by agreement in December 2013 amid heavy criticism of the procurement process and London Underground subsequently awarded the contract for the project to Thales in August 2015.

With the introduction of S7 Stock, the track, electrical supply, and signalling systems are being upgraded in a programme planned to increase peak-hour capacity on the line by 27 per cent by the end of 2023.A single control room for the sub-surface railway opened at Hammersmith on 6 May 2018, and Communications Based Control (CBTC) provided by Thales will progressively replace 'fixed block' signalling equipment dating back the 1940s.

On 7 July 2005, two Circle line trains were bombed. The blasts occurred almost simultaneously at 08:50 BST, one between Liverpool Street and Aldgate and the other on a train at Edgware Road.

Following the attacks, the whole of the Circle line was closed. While most other lines re-opened on 8 July, the Circle remained closed for several weeks, reopening a little less than a month after the attacks, on 4 August. 14 people were killed by the blasts on the Circle line trains. A third attack occurred on the Piccadilly line between King's Cross St Pancras and Russell Square.

Circle Line as a Venue for Parties[edit | edit source]

Circle Line Parties have gained in popularity on the line in the 21st century, similar to subway parties in the United States. These involve large groups of people boarding a train and holding an improptu party on the carriages, often dressing in costume.

Retrieved from "https://london.wikia.org/wiki/Circle_Line?oldid=76442"
Community content is available under CC-BY-SA unless otherwise noted.